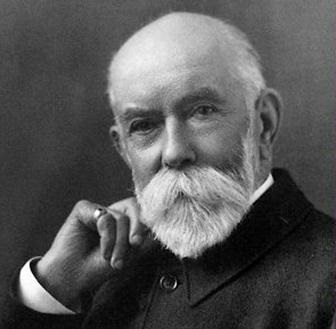 Thomas Burberry, born August 27 1835  was an English men's outfitter, and the founder of Burberry, one of the United Kingdom's largest branded clothing businesses. He is also known as the inventor of gabardine. Born at Brockham Green near Dorking and educated at Brockham Green Village School, Thomas was apprenticed to a local draper's shop before he opened his outfitting business in Basingstoke in 1856. Burberry recognised the need for promotion and publicity and ensured that Lord Kitchener and Lord Baden-Powell both wore his weatherproofs.

By these means he expanded his business into one of the United Kingdom's largest branded clothing businesses. He retired to Abbot's Court near Weymouth, Dorset in 1917. He was a teetotaler and campaigned against tobacco smoking. He was also a devout Baptist who liked to hold prayer meetings every morning.

He died at his home at Hook near Basingstoke in 1926. He married twice, first to Catherine Hannah Newman and second to Mary Marshall. He had two sons.

Burberry Group PLC is a British luxury fashion house, distributing clothing, fashion accessories, fragrances, sunglasses, and cosmetics. Its distinctive tartan pattern has become one of its most widely copied trademarks. Burberry is most famous for its trench coat, which was designed by founder Thomas Burberry. The company has branded stores and franchises around the world and also sells through concessions in third-party stores.

Queen Elizabeth II and the Prince of Wales have granted the company Royal Warrants, which have been maintained despite Burberry's closure of its factory in Wales. The Chief Creative Officer is Christopher Bailey.

Burberry Touch for men  launched in 2000. A mysterious Burberry perfume, one of the best Burberry for men colognes. "THE man fragrance for you". Aroma Notes: Cedar, Musk, Citrus, Floral Leaves, Vetiver, Spice