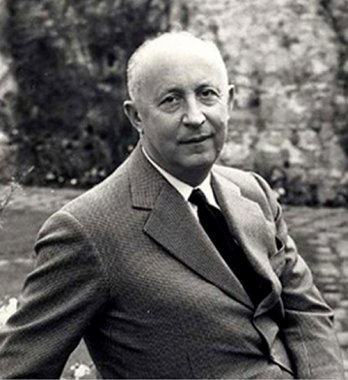 Christian Dior was born on January 21st 1905.  He was a French fashion designer known as the founder of one of the world's top fashion houses.

Christian was born in Granville, a seaside town on the coast of Normandy, France, the second of five children of Maurice Dior, a wealthy fertilizer manufacturer, and his wife, Isabelle Cardamone. When Christian was five years old, the family moved to Paris, France.

Christian’s family hoped he would become a diplomat; he was artistic and gay and had a desire to engage in art. To make money he sold his fashion sketches outside his house.

In 1928, Christian left school and received money from his father to finance a small art gallery where he and a friend sold art. Three years later following the death of his mother and brother, accompanied by a financial disaster in the family’s fertilizer business as a result of the great Depression, his father lost all control of Dior Frères and the gallery was forced to close.

While Christian Dior worked with fashion designer Robert Piguet in 1940, he was called for military service. Dior left the army in 1942 and joined the fashion house of Lucien Lelong, where he and Pierre Balmain became the primary designers. Christian remained an employee of Lelong for the duration of World War II and labored to preserve the French fashion industry during this time because of economic and artistic reasons.  He designed dresses for the wives of Nazi officers and French collaborator’s, as did other fashion houses that remained in business during the war.

Dior fashion house was opened on December 8, 1946, and was backed by Marcel Boussac, a well-known figure in the cotton-fabric industry. Christian's designs were more voluptuous than the boxy fabric-conservative shape styles of World War. He was a master at creating shapes and silhouettes and was often quoted as saying "I have designed flower women”.  His look employed fabrics lined predominantly with percale, boned, bustier-style bodices, hip padding, wasp-waisted corsets and petticoats that made his dresses flare out from the waist, giving his models a very curvaceous form. Initially women protested against Dior’s designs because they were not accustomed to having their legs covered as a result of previous limitations on fabric. There was some backlash to Christian’s designs because of the amount of fabrics used in a single dress or suit. During one photo shoot in a Paris market, the models were attacked by female vendors over this profligacy, but opposition ceased as the wartime shortages ended. When his fragrances were introduced they became popular and sold quite well.

Pure Poison for women launched in 2004. A perfume for women that suggest passion. A ladies perfume for any occasion. Aroma Notes: Jasmine, Gardenia, Sandalwood, Musk, Amber and Orange.

Higher Energy for men is a mix of rosemary, cypress and musk.