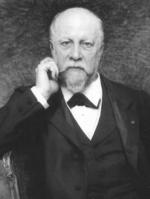 Frederic Boucheron (1830-1902), is part of the French family dynasty founded in 1858, with the opening of his first store in the Galerie de Valois, at Palais-Royal, during the heyday of the Second French Empire. He created his atelier in 1866 and a year later won the Gold Medal during the Exposition Universelle (1867). The 150 year Boucheron legacy is well founded in perfection. Boucheron  perfume have always been of the highest quality and richness.

Boucheron is a French jewelry house located in Paris, 26 Place Vendôme, owned by Kering. Frederic started Boucheron in 1858 and he is considered a pioneer among jewelers. In 1989, Boucheron opened a store in Moscow, later transferred to Saint Petersburg in 1911. More store openings followed in Japan in 1973, Shanghai, Dubai in 2005, and finally Hong Kong and Kuala Lumpur in 2006.

Boucheron was a family business : after the death of its founder Frederic Boucheron in 1902, his descendants took over the business. In 1921, Boucheron was commissioned to make a tiara for Lady Greville which was later given to Queen Elizabeth The Queen Mother. Her grandson Prince Charles passed the tiara on to his wife Camilla, Duchess of Cornwall. Queen Elizabeth II also has a collection of Boucheron jewels, in addition to Czar Alexander III, royal patrons of Boucheron have included Maharajah Sir Bhupinder Singh of Patiala, Riza Shah Pahlevi, Queen Farida of Egypt and Queen Rania of Jordan.

In 1928, the Maharaja of Patiala asked Boucheron to set the stones of his treasure, which were brought to the Place Vendôme boutique by the prince. In 1994, the family business shifted to a more global approach with its selling out to Schweizerhall. The House of Boucheron was then acquired by former Gucci Group in 2000, which was bought by PPR in 2004. Pierre Bouissou was appointed CEO in April 2011. learn more.

Trouble for women boasts fresh floral's and tones of amber and musk.

Fredrick Boucheron cologne is manufactured with years of expierence, which makes it such a perfect way to honor your love one with the best perfumes.